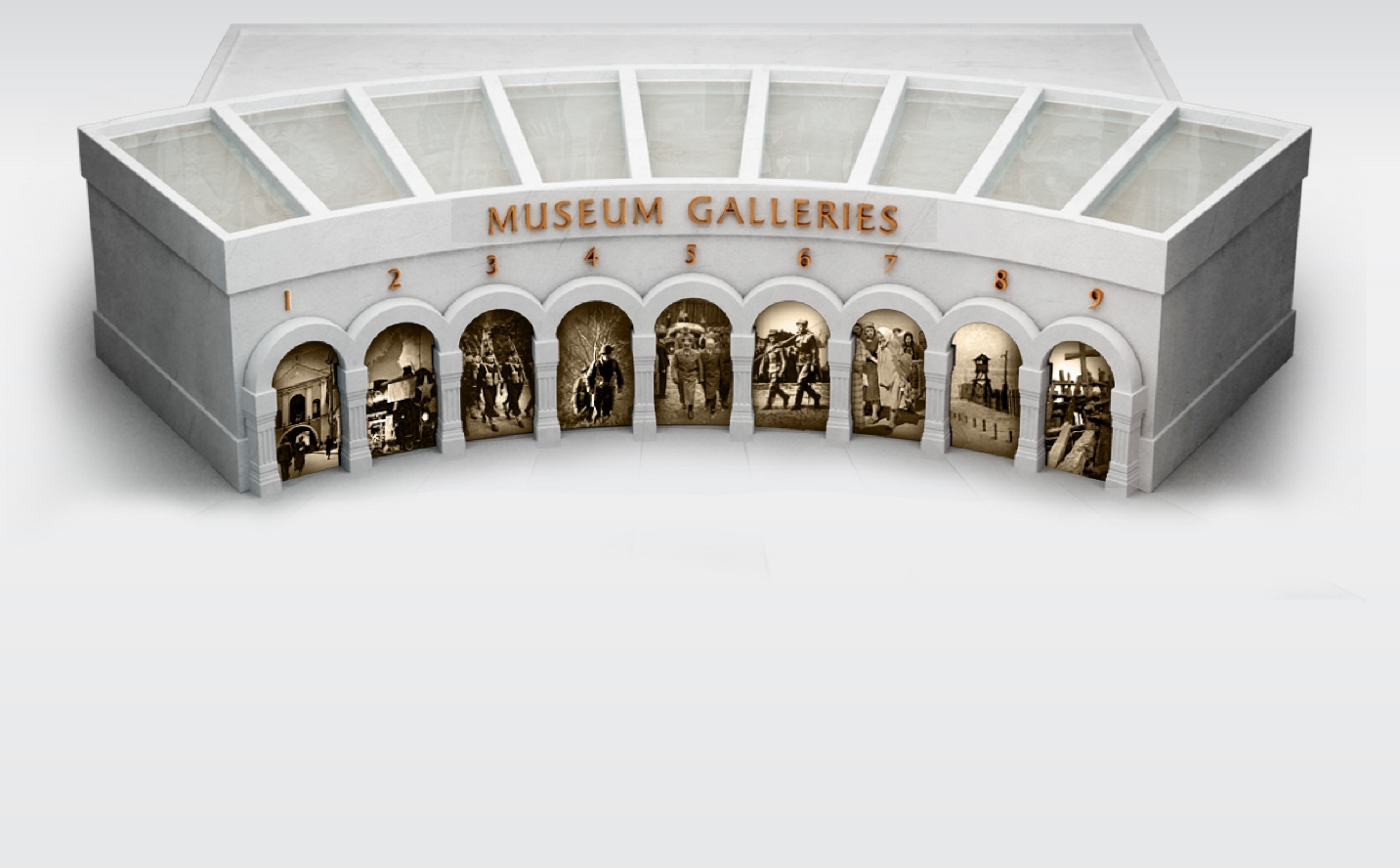 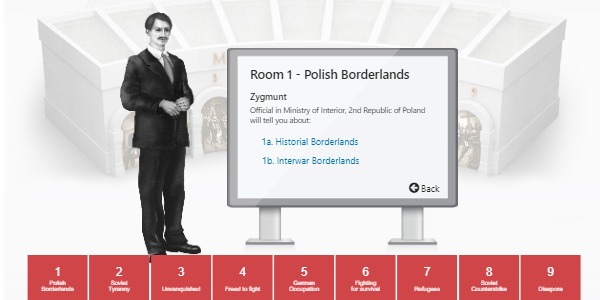 Official in Ministry of Interior, 2nd Republic of Poland
will tell you about: 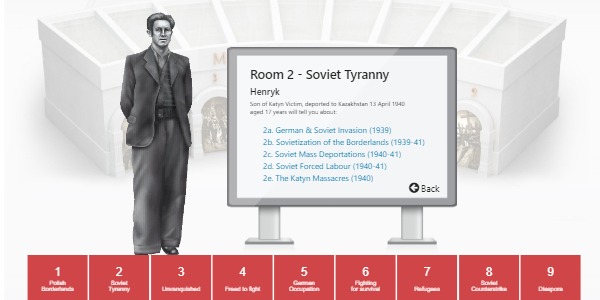 Son of Katyn Victim, deported to Kazakhstan 13 April 1940
aged 17 years will tell you about: 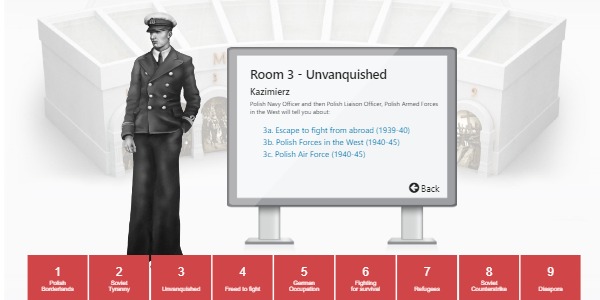 Polish Navy Officer and then Polish Liaison Officer, Polish Armed Forces
in the West will tell you about: 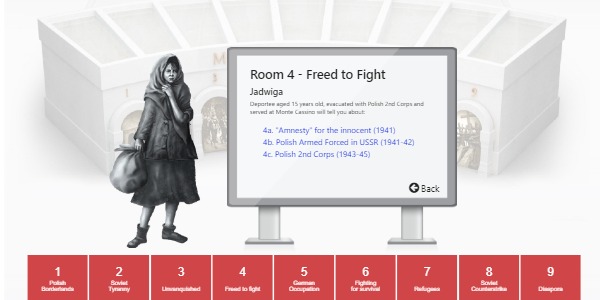 Deportee aged 15 years old, evacuated with Polish 2nd Corps and
served at Monte Cassino will tell you about: 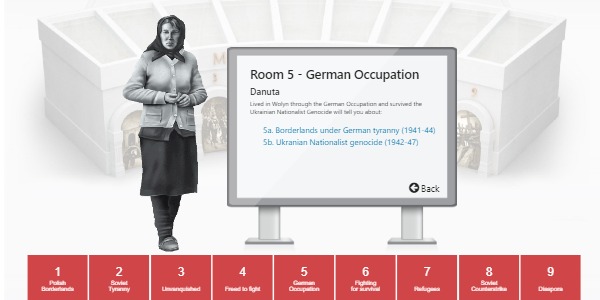 Lived in Wolyn through the German Occupation and survived the
Ukrainian Nationalist Genocide will tell you about: 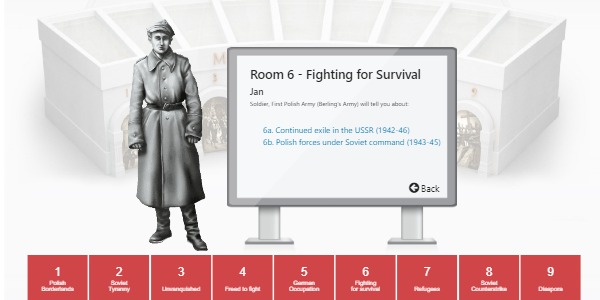 Soldier, First Polish Army (Berling’s Army) will tell you about: 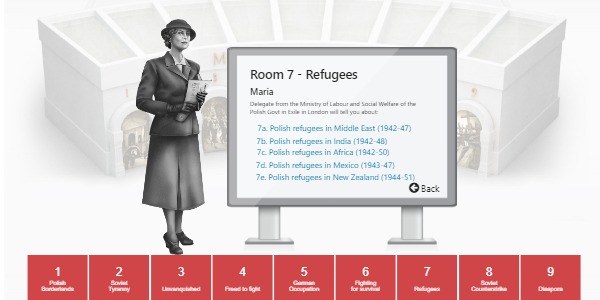 Delegate from the Ministry of Labour and Social Welfare of the
Polish Govt in Exile in London will tell you about: 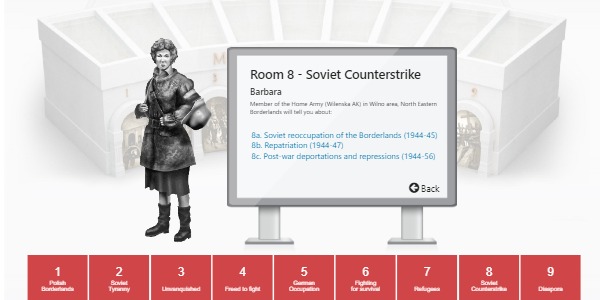 Member of the Home Army (Wilenska AK) in Wilno area, North
Eastern Borderlands will tell you about: 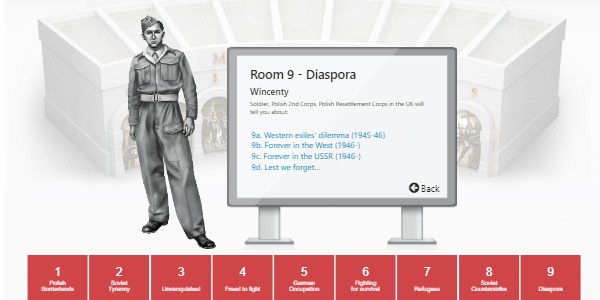 Soldier, Polish 2nd Corps, Polish Resettlement Corps in the UK will
tell you about:

Welcome to the Museum Galleries and to their newly launched English overviews.

Each Gallery has been curated, contributed to and reviewed by a panel of historical experts. There are 29 Rooms planned in total, organised into the 9 Galleries or sections displayed in this introductory section. The Polish versions of 8 of the Rooms have already been opened and these are progressively being translated into English. Work is also continuing on the remaining 21 Rooms, which will be opened progressively over the coming years.

In the meantime, the English language overviews of all 29 Rooms have now been opened. The Rooms in each of the 9 Galleries are introduced and overviewed by a contemporary Polish character whose identity is fictional, but who is based on a composite of real persons. Each of these characters presents an introductory overview of the Rooms in their Gallery, via an audio narration and a selection of photographs, documents and testimonies.

SINCERE THANKS TO SUPPORTING PARTNERS

We gratefully acknowledge the support of SBS (Special Broadcasting Service) in Sydney for providing us with a reduced rate to record and post-produce the 29 narrative tracks.

We also gratefully acknowledge the narrative voice talent contributions by the actors of Sydney Polish theatre group “Teatr Fantazia” and of its director, Joanna Borkowska-Surucic, as well as of Sydney actor and lecturer Andrzej Siedlecki, who in addition provided recording and post-production services.

SINCERE THANKS TO OUR COLLEAGUES

We gratefully acknowledge the valuable work of the Kresy-Siberia project team led by Anna Pacewicz and supported by Stefan Wisniowski, Aneta Hoffman and Krystyna Szypowska as well as the services of I.T. firm Momint and graphic designer Sylwia Sukiennik.

We gratefully acknowledge the participation of the following Kresy-Siberia members who very kindly volunteered their time and expertise to research and write narrative texts, gather and upload photographs, documents, maps and survivor testimony excerpts.