It is night, November 1944. The sea is calm but there is danger lurking below the surface of the water. Japanese submarines can strike at any moment. Captain Randal, the American troop carrier is crossing the Indian Ocean. There are 733 Polish children, 105 Polish personnel and 3000 American and a group of New Zealand soldiers on board. The Polish children and personnel are being transported to New Zealand in response to New Zealand Prime Minister, Mr. Peter Fraser’s invitation to stay in his country until the end of the war. In spite of forced deportations, slave camps, death and misery in the Soviet Union and after three years in Iran, everyone still believes that, after the war, they will return to a free Poland.

There are severe food shortages in New Zealand. In the country of lamb, milk, and butter, there are food rations. New Zealand is sending everything to Britain but the government is still prepared to share with the survivors, the little New Zealanders have.

On arrival in Wellington, they are met on board by the Prime Minister, the Honourable Peter Fraser and the Polish Consul and his wife, Kazimierz and Maria Wodzicki, the latter being responsible for encouraging the Prime Minister to bring the refugee group to New Zealand.

When they look out the windows of the train the children see an unbroken line of people lining the tracks, smiling warmly and waving Polish and New Zealand flags. New Zealanders are welcoming this first large group of refugees to their country.

The Polish group is being accommodated in a former army camp, close to Pahiatua – asbestos buildings, small and large to suit different purposes, such as school and hospital, the church, the recreation hall, the dormitories and small huts for families are scattered across green paddocks. There is even a beautiful, chapel for daily prayer. The children study, pray and play in the Polish language.

At the end of the year the children receive their school reports in Polish. The most important subjects are ‘Behaviour’ and ‘Religion, There are also lessons in English as a second language.

The Polish Government in Exile in London meets all their living expenses.

Scouting and all the national and religious feast days and traditions are celebrated in Polish. There is Polish choir. The children perform at a concert in Wellington. On Sundays, New Zealanders visit the Camp and hand out sweets to the children.

There are sports teams. Polish children play against their Kiwi counterparts. The first contacts between the Polish and the New Zealand communities are established.

Everyone loves the Camp. It is a “Small Poland”.

A year after their arrival, the Polish community receive the news that World War 2 has ended. The Allied Nations decide however, that Poland is to be left in the communist block, behind the “Iron Curtain”. Everyone feels disbelief, disappointment and betrayal. There is no free Poland to return to. The Camp is about to be closed. To ensure that the new communist Government in Poland does not claim the children and force their return, a special committee asks Mr. Peter Fraser to give all the children without parents the status of “state wards”.

Only a handful of adults and children return to Poland. The majority remain in New Zealand.

Gradually, increasing numbers of children are sent out from the Camp to New Zealand schools to prepare for further life. The Catholic Church takes responsibility for placing children in Catholic boarding schools or with New Zealand families. The New Zealand Government meets the cost of their education.
From 1947 members of the former Polish Army arrive at the Camp to join their families thus forming the second Polish refugee group to New Zealand.

The Polish Children’s Camp finally closes in 1948. Both, children and adults disperse, and settle among New Zealand communities and start to make their own contribution to the welfare and development of their new homeland. Polish Jews, who immigrated to New Zealand prior to World War 2 and established a Polish Association in Wellington, invite adult Poles to join the organization.

Older and younger girls are placed in the Polish Girls’ Hostel. Younger school boys are accommodated at the Boys’ Hostel in Island Bay, Wellington. The youngest boys are sent to a Home in Hawera.

More transports of “Displaced People” arrive in 1949 and 1950 from Germany. They are the refugees from different European countries. There are also Polish refugees among them from the formerly German occupied western Poland and they form the third group of Polish immigrants to New Zealand.

Polish people purchase a house to be used as the “Polish House” in Wellington. Adults pay from their own earnings. Teachers are trained to teach at Polish Saturday school. There are lectures on Poland, presented by older members of the Polish community.

Similar Dom Polski’s are opened in cities wherever there is a sufficiently large Polish community established.

It takes another few years and the former Polish children are adults and begin to play an important role in maintaining Polish community activities.
Later still, the children’s children take on the responsibility for ensuring that the Polish spirit prospers and grows in southern hemisphere. 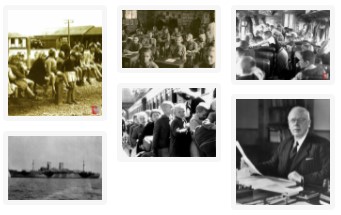