Life in Soviet occupied Eastern Poland was bleak. We had not seen my father, uncle and brother since the war began back in September. Local officials had been replaced by communists. Food was becoming scare, the bread lines longer. It was a cold winter with so little fuel. Life was bleak.

But our worst fears were realised when, one night, we were awoken at 2am by loud banging on the door and Russian voices “Odkroytye dvyeree” (open the door). It was the 13th April 1940. Two Russian soldiers, with members of the Ukrainian militia and also the local communist committee, were yelling at us to get dressed quickly and pack for a journey. Ridiculous charges were read to us about being deadly enemies of the Revolution.

As Mama frantically packed, all the time crying, Dziadzio Karol and I were held at gunpoint. The soldiers searched for weapons and even checked the ashes at the bottom of the stove and in the fire grate. Barely half an hour later we were forced at gunpoint onto the back of a manure cart and taken off into the bitterly cold night. Our Polish neighbours had come out to bid as farewell – they were crying and making the sign of the cross as we went by. Mama and Dziadzio insisted that we hold our heads high. We were following in the noble footsteps of our ancestors, also forcibly removed by the Russians. Like them we were innocent. Our only crime was to be Polish.

That night similar scenes were unfolding all over the Eastern borderlands as thousands of Polish people were dragged crying from their homes and forced into cattle cars. This was part of a much bigger Soviet master-plan. In total 1 to 2 million Polish people were deported into the depths of Russia, to the arctic North and to Kazakhstan. Organised methodically, under the supervision of Beria, there were 3 waves – the first on the 10th February, then the 13th April and the last in June/July of 1940.

Meanwhile, at Podwołoczyska station we were ordered into a stinking, unheated cattle wagon. Here, the full scale of this human tragedy struck me. There must have been 100 wagons. More than 60 of us were crammed into ours alone. Basic wooden bunks had been built on opposite sides and a hole had been cut out of the floor in the corner to serve as a toilet. A tiny window at the very top was the only source of fresh air. Inside it was dark and the air putrid. Soon we were thirsty. Then the sound of the guards bolting and locking the sliding door. The whistle blew and the train slowly departed. What thoughts filled our heads? What would become of us? Where were we going? Would we ever see our beloved Poland again? How would our fathers find us?

Several hours later we crossed the Polish – Soviet border. Many people cried, others held each other or were lost in their own thoughts. Somebody began singing the Polish national anthem “Jeszcze Polska nie zginela, Kiedy my zyjemy” / “Poland has not yet perished, as long as we live…” and others began to join in until, soon, the sound of singing from cattle cars in front of us and behind us filled the air.

Throughout that long and arduous journey we would stop randomly at a station to be given meagre rations of stale bread and a small bucket of water. Old Mrs Milewski, who had become increasingly ill, then died. The Soviet guards took her body and threw it out the side of the railway track. We heard later that the earlier deportations of the 10th February, which was a bitterly cold night of minus 40, left the frozen bodies of young children littered along the tracks.

By now the days were becoming warmer although it was freezing cold at night and we huddled together for warmth. First travelling east, we then headed in a southerly direction. From the monotonous Russian plains, the landscape changed after the urals. We had left Poland and now we were leaving Europe. Here was Asia.

It was now over 3 weeks since we had left our homes. Not having washed we were filthy and the wagon squalid. People were becoming weaker from the lack of food, especially the elderly and young children. Finally we arrived at our destination – Kazakhstan. Ten of us were loaded off the wagon. Standing in the middle of no-where, in a flat, arid landscape with no signs of habitation, I made a promise to God – I shall not die here. I shall return to Poland 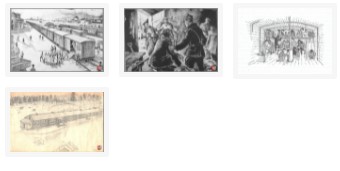 In total 1 to 2 million Polish people were deported into the depths of Russia. They faced forced labour, squalid living conditions, starvation…