Through the civilian camps in Tehran via Isfahan and Ahwaz in Iran, 33,000 Polish refugees have been transferred to countries around the world. Over half of those Polish refugees have come to Africa in 1942 and 1943. Travelling on British ships, sometimes with several weeks transit in India, to ports in Kenya, Tanganyika and Mozambique, the refugees have now been dispersed to settlements in the British colonies of Uganda, Kenya and Tanganyika, also to South Africa, North and South Rhodesia.

Africa, you may wonder? But the evacuation of tens of thousands of Polish refugees from Russia has been a huge logistical campaign for the Allies. We need to send the civilians as far away as possible from the War fronts. The British colonies in Africa at least are a safe haven away from the battlefields.
The majority of civilians here in Africa are women, children and teenagers. Actually, the teenagers are mostly female as the older boys are in the military schools in Palestine and Egypt. Only a small % are men, either older or unfit for military service.

There are 19 camps in total – in Uganda, the camps are located in Masindi and Koja on Lake Victoria; In Kenya, they are located in Rongai, Manira, Makindu, Nairobi and Nyali near Mombassa and in Tanganyika, the largest settlement with 4,000 refugees is Tengeru with several smaller camps in other locations. We also have refugee camps in South Africa at Oudtshoorn, as well as camps in North and South Rhodesia.

Former prisoner of war buildings or specially built settlements now house the refugees throughout Africa. In all of these settlements Polish schools, churches, hospitals, community centres and co-operatives have been established. Polish culture is also flourishing. We even have Polish language programs on African radio and a Polish press. I have to say that the Polish government in exile has made a huge effort to create “Little Poland” here in the African colonies.
The Office for the Ministry of Labour and Social Welfare of the Polish-Government-in-Exile is located in Nairobi, the capital of Kenya. This is my base when I visit the refugees in Africa but today I am visiting the settlement at Koja.

The Koja camp is an idyllic location, a small peninsula on Lake Victoria. On three sides it is surrounded by water, glistening under the hot African sun. The houses are made from clay and are whitewashed inside. The roofs are covered with elephant grass – there are no ceilings and no floors. Living conditions are very simple. Each family has one room and 3 or so families to a house share a kitchen, with the toilets located outside. There is no electricity. Furnishings are basic and everyone sleeps under a mosquito net. But, despite this, the refugees are very happy here. The misery of Siberia is not far behind them and, in comparison, Koja is beautiful. But with the tropical climate, comes the parasites and insects. The mosquitoes carry malaria, the termites are destructive and the sand flies tormenting.

Swimming is absolutely forbidden here by the camp authorities. Not only is there the risk of contracting tropical diseases but there are crocodiles here. Our Polish children, having escaped the USSR, certainly have not lost their sense of adventure.

Life here is very communal and the refugees have worked hard to build the infrastructure. There is a community centre, church, hospital and schools. As with all the refugee settlements, Scouting is an important part of life here. General Anders 2nd Corps has sent instructors out to the camps. The Scouts have frequent meetings, they go for treks in the jungle, make campfires and go camping.

You know, in pre-war times Africa was known to Polish children only from Henryk Sienkiewicz’s book “W pustyni i puszczy”. It would have been beyond all our wildest imaginings that here would be created a “little Poland”.

Compared to the temporary camps in Iran, there is really a sense of normal life here and a sense of longevity, at least until the end of the war. The young people in particular really seem to be flourishing and enjoying life in a communal environment. As for what will become of the Polish refugees after the War…. it is difficult to say. Everyone prays for a return to an independent and free Poland and being reunited with their loved ones fighting at the front.
But tomorrow I am leaving Koja. I will be visiting the settlements of Kigoma, Kidugala, Ifunda, Kondoa and Morogoro in Tanganyika. 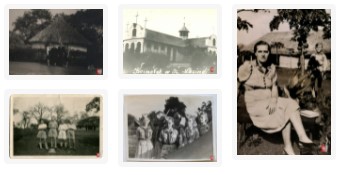 Over half the 33,000 Polish refugees transferred around the world, that is 18,000, went to Africa in 1942 and 1943.  Travelling on British ships to ports in Kenya, Tanganyika and Mozambique, the refugees were…