September 1941 and we hear that General Anders, who has just been released from the notorious Lubianka prison in Moscow, has been appointed as Commander in Chief of the Polish army to be built up in the USSR.

Stalin has agreed to provision our Army and at last we will fight alongside Britain and the Allies against Germany. Recruitment has begun in the Ural Mountains. The 200,000 Polish servicemen taken POW in 1939 are now being released from gulags all over the Soviet Union. Emaciated and exhausted they are flocking to enlist in various centres in the Orenburg Oblast – in places called Totskoye, Kuibyshev, Koltubanka and Tatischevo.

Winter is approaching and there are rumours that our 15,000 Polish Officers, taken prisoner in 1939, have not reported to the Polish Army HQ in Buzuluk. This includes our father and I cannot help but fear the worst. Stalin told General Sikorski that they could have escaped to Manchuria – but all 15,000?

The Germans are advancing on the Eastern front. Stalin is demanding that the Poles fight the Germans with the Russian Army, but General Anders argues that our Army needs more time to recover from starvation and disease. Meanwhile the Soviet war machine is moved out of harm’s way to the Urals, putting great pressure on the limited resources in that area. Stalin claims that he cannot provision Anders’ Army as agreed and argues for limiting recruitment to the Army. But Anders knows that Polish civilians, including women and children, will starve if he cannot enlist them as his soldiers. We have 44,000 Polish servicemen enlisted so far, but rations are insufficient. Half of the army has no boots and only one division has weapons. A compromise is reached: Stalin argues that food supplies and other conditions will be better in Uzbekistan so the Army is being relocated to Central Asia. The Polish Army can also be increased to 100,000. The troops are being herded into cattle trains. Already weakened by typhus and starved from their imprisonment since deportation, they endure unimaginable conditions of cold, hunger, and disease during the long journey from the Urals on the Trans Aral Railway to reach the mustering points for the Army near Tashkent in Uzbekistan.

More and more Poles from all over this vast, inhospitable, country are being released from enslavement in gulags, lumber camps, mines, posioleks and collective farms. Travel documents are being issued but each must make his or her own way from Siberia or Kazakhstan to the Army recruitment centres. My family, too, is hastily preparing to leave our kolhoz so that we can enlist. The rumour is that Stalin will allow the Polish Army to leave Russia to fight with the Allies in the West. Most of all we hope that the Army will have news about Father, an Officer in the Polish Army. We have not heard from him since a postcard from his POW camp at Ostashkov on the 8th March 1940.

Finally we have our release papers, ‘legitimacje’, which permit us to travel. We walk until hitching a ride on a horse-drawn wagon. At the railway station crowds of people are waiting to board a train to Tashkent so we huddle with them on the platform in the bitter cold. Many trains flash past, carrying troops and goods – ‘To the front’, people say. A week later we finally arrive at Tashkent. What an assortment of emaciated, filthy, sick and exhausted people we are, clamouring to join the Army! I am successful and am now a cadet in the camp at Tashkent! Discarding my rags for a military uniform, I am ready and eager to serve Poland!
We hear later that some are not so lucky. Provisions are short and thousands are turned away, told that recruitment is suspended and they must try their luck later. They are re-directed to work in collective farms – what will become of them?

March 1942. Here in Central Asia there are several mustering points for the Polish Army – Samarkand, Kermine, Ashkhabad, Istaravshan and Djalalabad. The headquarters of Jangi Jul, south of Tashkent, is in Uzbekistan. The men are in camps but civilians are billeted with the local Uzbeks. There are constant food shortages. Our Army now numbers 70,000 but Stalin has further decreased our rations to 26,000. There are epidemics of typhus, dysentery and malaria. An Officer told us that at Guzar, 120 men are dying every day.

Wonderful news! Stalin has agreed to release the Polish Army to Persia. Again we are herded into cattle wagons but this time we are travelling with great joy because we are on our way out of exile.

We are on the Trans Caspian Railway line and we cross the mighty Syr Daria River to arrive in the fabled city of Sarmarkand on the ancient Silk Road. A few hours later we arrive in Kermine, where carriages are added for a contingent of Polish Air Force personnel. Upon leaving Russia they will go to Britain to join Polish Air Squadrons, who have been distinguishing themselves in the air battles fought by the RAF.

We pass through Bukhara, famous for its carpets, and then cross the border from Uzbekistan into Turkestan. In the early morning light our train crosses the Amu Darya River and finally arrives in Turkmenabad. On we go passing through Mary, Ashgabad and skirting the edges of the Kara-khum Desert. Sometimes we see small groups of nomadic tribesmen with their camel trains, but the landscape is always desolate.

Krasnovodsk, 31st March 1942! At last we have reached the shores of the Caspian Sea where Soviet cargo ships are waiting to take us to freedom. The journey is terrible. Human bodies, dressed in rags and riddled with lice, are everywhere. People suffering dysentery have to clamber over others to answer calls of nature over the side of the ship. The sea is rough, we are exposed in the relentless sun for over 16 hours and worst of all, there is no water. Finally, the shores of Pahlevi, where we are welcomed by the local Persian people and a tent city has been set up as a reception centre. Of the 1 to 2 million Polish citizens who were deported to USSR, a total of approximately 116,000 exhausted and starving military and civilians are evacuated to Persia in two waves March/April and then August 1942. For the first time in 2 years we are breathing the air of freedom, knowing that we have escaped from exile. 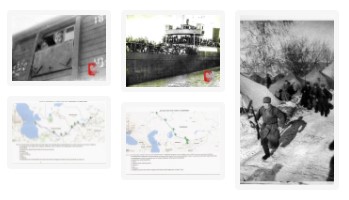