By the beginning of 1943 we would often hear rumours that gangs of Ukrainians had attacked and murdered Polish residents in various parts of Wolyn.
What makes Wolyn different to other Polish states is that, here, the Ukrainian population outnumbers the Polish population – of over two million inhabitants about 69% are Ukrainian, 16% are ethnic Poles and the rest a blend of other ethnic minorities.

In October 1942 the Organisation of Ukrainian Nationalists launched the Ukrainian Insurgent Army (or UPA) in Wolyn. Its task was to cleanse the Polish Eastern Borderlands of all Poles for the sake of Ukrainian independence. Ukraine for the Ukrainians was one of their mottos and they proclaimed:

“We should undertake a great action of liquidation of the Polish element… to liquidate the entire Polish population… forest villages…. should disappear from the face of the earth”.

So it was. On 8th February, a gang of Ukrainians came to Wlodzimierzec. I saw with my own eyes that they had slit the throats of three of our guards we had put in place to protect the village. On the third day we found out that all the residents in Parosle had been murdered. My nephew Lutek was found dead, tied to a wagon. He had eight wounds to his head inflicted with a whip.

You see, the UPA were not content to merely shoot and kill Polish people. This was a campaign of terror. The attacks were committed in unspeakable and unimaginable ways. Fired up on alcohol the UPA and armed peasants would go on mad killing sprees. The preferred weapons of choice were knives, axes, saws, pitchforks, scythes and bayonets. Poles were also burnt alive, buried alive and thrown down wells. Little children who tried to escape by running into the fields or forests would be hunted down ruthlessly, tortured and killed.

The whole village of Brzezina was wiped out on 2th February, 1943.

We were paranoid and frightened. Each night the sky was lit up with burning buildings and each night the fires got closer. Here in Wolyn the Polish population was scattered amongst isolated villages and colonies. By the time a UPA gang surrounded a village in the early hours of the morning it was too late for the Polish inhabitants to run or hide.

Attacks continued throughout July. Polish people were being murdered. The Ukrainians who had been our friends and neighbours were torturing us, murdering us, burning our villages and stealing our land.

“I saw my father lying in a pool of blood by the entrance to the house. Not too far away lay the butchered remains of my brother, Adam. Two-year old Basia lay outside by the window. She was also dead, pierced through either with a bayonet or a knife. I found my mother’s lifeless body next door in my uncle’s yard: her head was cut to shreds. Not far away lay my Uncle Alexander, murdered together with his two daughters aged 7 and 9”.

(Reference In Tadeusz Piotrowski, Genocide and Rescue in Wolyn, p. 52.)

Choromce became the self-defence centre for the surrounding area including the villages and colonies of Poroda and Prurwa. We built barricades, bunkers, shelters and corrals. We dug trenches. We mowed the grass, shrubs and trees in a perimeter of approximately 200 metres to prevent surprise attacks from the Ukrainians. We had a few grenades and about 13 rifles to defend ourselves.

At the end of July our village was attacked one evening. Inside the shelter, everyone was terrified, crying and praying. Amidst the gunfire, the village was burning. As dawn approached a second Ukrainian gang came out of the Purbowski forest and attacked. At 7am we were attacked for the third time. Our situation was critical and we resigned ourselves to dying. When about 8:30am the Germans from Wlodzimierzec arrived. They saved our lives but one week later we were transported to Germany for forced labour. I am amazed at the irony of our survival.

Will it ever be possible to know the true death toll from the Wolyn massacres? The academic consensus seems to be that the UPA killed 35,000 to 68,700 Poles in Wolyn. A further 20,000 to 40,000 are estimated to have been killed in the three provinces of Eastern Galicia, and another 10,000 to 20,000 in the Polesie and Lublin area. Other estimates are substantially higher.

Those of us who survived are haunted everyday by the memories of those terrifying months in Wolyn in 1943. 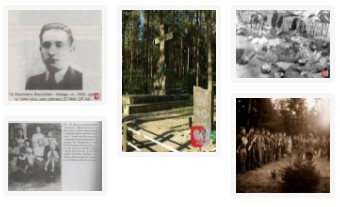 Poland’s Eastern Borderlands of the 2nd Republic of Poland was highly multi-ethnic.  In Wolyn the Ukrainian population outnumbered the Polish population…

Poland’s Eastern Borderlands of the 2nd Republic of Poland was highly multi-ethnic.

In Wolyn the Ukrainian population outnumbered the Polish population – of the 2 million or so inhabitants around 68% were Ukrainian.

The OUN (Organisation of Ukrainian Nationalists) in February 1943 created the Ukrainian Insurrectionist Army (Ukrains’ka Povstans’ka Armiia, UPA) which at its height numbered 40,000 men.

The principal aim of the UPA was to cleanse eastern Poland/western Ukraine of all Poles:

In April 1943 the UPA began their terror campaign on the Polish population of Wolyn.

With most able-bodied men at the front, the majority of the victims were defenceless women, children and the elderly.

A feature of the UPA action was its sheer barbarity. The Poles were tortured and murdered with knives, scythes, axes, pitch forks, burnt alive, buried alive and thrown down wells to drown.

Many Ukrainians tried to shelter their Polish neighbours and ended up sharing the same horrific fates.

The only survivors were those who managed to flee to larger centres where the German occupying forces had garrisons. They were then deported by the Nazis to Germany as forced labour.

There is a general consensus among Western and Polish historians that Polish civilian casualties from the UPA in Wolyn range from 35,000 to 68,700 and neighbouring states 20,000-40,000.

Some extreme estimates place the total number of Polish victims as high as 300,000.