As exiles scattered throughout the vast reaches of the Soviet empire, we are now part of Stalin’s massive labour force which is a key element of the Soviet economy. The work assignments of the Poles vary from felling timber in the frozen Siberian forests to working underground in deep gold mines, building canals in frontier territory, laying railroads, working in cotton fields and factories.

We, “the family system of enemies”, are forcibly re-settled in kolhozes, collective farms and villages. The 200,000 or more of our Polish soldiers have been taken to gulgas in Siberia. The most notorious of these is Kolyma, a gold-mine gulag in the remote far north-east of Russia inside the arctic circle. From here, “no one ever returns”. Hard labour, starvation, malnutrition, severe cold reaching minus 70, accidents and beatings mean certain death. Of the more than 10,000 Polish POWs who have been sent to Kolyma, only a handful will live to tell the tale.

Meanwhile, we work from early dawn to late at night, 7 days a week. They tell us “Those who do not work, do not eat” but the food is pitiful, watery soup and a piece of stale bread. We are so hungry.

Our living conditions are primitive. Lice and bedbugs are constant companions and afflict everybody in the camps. At night they emerge from the walls and ceilings to drop on us and torture us. Picking lice out of each other’s clothes and hair is a constant chore. The Russians pride themselves on their de-lousing baths but Mama says the lice are even worse there from all the dirty clothes. They are also the bearers of disease, especially typhus. Our people are being decimated by disease with epidemics of typhus, cholera, diphtheria, small pox. There is no medicine and no cure.

Little Basia Paradowska has died, at just two years old. We made a little coffin for her and dug a shallow grave on the steppe, with a wooden cross. Everyday we hear of someone who dies, particularly the very young and the very old. Within a year of 1 – 2 million of us Polish citizens being deported, half will be dead. Russia is littered with tens of thousands of our bodies.

Those who are working in the Northern reaches of the Soviet empire have to endure freezing conditions, often dropping to 60degrees below zero with snow falling from September until the following May. Standard quilted jackets and felt boots give little protection against the bitter cold.

Here in Kazakhstan the temperatures on the steppe are extreme. In summer it reaches 40 degrees and huge dust storms sweep across the steppe. But in winter it reaches minus 40 degrees with huge blizzards and whiteouts that last for days.

Hunger is a constant companion because most of our grain is requisitioned by the Soviets. We only survive because of Mama’s ingenuity, bartering with the local population, fortune-telling, selling clothing and personal belongings to the locals. In the Siberian summertime there are berries and mushrooms to pick. In the wild steppes of Kazakhstan there are desert rats to capture.

I am lucky because I am young and strong. The Kazak supervisor has taken a liking to me and asks for me to work with him everyday. I also do extra work for some of the Polish people in exchange for food. We live in a corner of a single-room clay hut with a Kazak family. They are of Mongolian origin, dark and Asiatic. Traditionally they were nomads but they have been suppressed like us by the Russians and forced to slave in collective farms for the Soviet state.

Our daily life and travel is restricted by the local NKVD. Officially we are considered 2nd class citizens and not permitted to travel but the reality is the remoteness and harshness of the environments we are placed in make escape virtually impossible. Many camps do not even have armed guards. Every
camp, kolhoz and village has a resident Commandant or NKVD officer. There are constant interrogations, and everyone is wary of informants.

The children who are too young to work are sent to school where they are taught that there is no God and Father Stalin is the father of us all and provides for all of our needs.

We are forbidden from practising our religion. We say prayers in secret at night. It is only our faith that sustains us. We pray to God for a miracle that will set us free 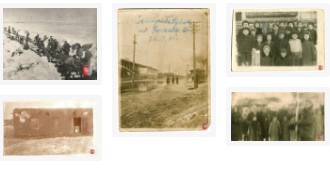 1-2 million Poles were deported to the USSR for forced labour.  The work assignments of the deportees varied from felling timber in the frozen Siberian forests to working underground in deep gold mines, building canals…