Escape to Fight from Abroad

Narrator, Kazimierz Toporny – Senior Officer with ORP Grom, Polish Navy and now aide-de-compe
to General Sikorski, Commander-in-Chief of the Polish Armed Forces in the West under the Polish
Government in Exile

When Germany invaded Poland on 1st September 1939, I arrived in Britain with the destroyer division ORP Blyskawica, ORP Grom and ORP Burza of the Polish Navy. We had been on a heightened state of alert and the night before we received the secret order to execute Peking – “to sail for Britain, departure immediate”. The following month we were joined by submarines Wilk and Orzel, the latter of which had an epic escape out of the Baltic. We were immediately put back in action under the High Command of the British Navy, undertaking operations in the Western approaches to the United Kingdom to protect shipping trade from the threat of the infamous German U-Boats.

But meanwhile, in Poland – our forces put up a desperate and heroic fight in the September 1939 campaign. The German onslaught pushed our defensive lines back to the South East. We waited for Britain and France to mobilise on our Western front as promised…. but they didn’t come. Instead the Soviets invaded from the East on 17th September.

For 35 days we resisted. Warsaw held out until 27th September and I’m especially proud that our Naval base held out until 1st October. We are Poles and we will fight for God, Honour, Country.

Unlike the French, our Polish Government did not formally surrender but on the 18th September, the President, Government and High Command crossed the border into Romania. Our President was interned by the Romanians and he named Wladyslaw Raczkiewicz to be the new President of Poland, based in exile in Paris. General Wladyslaw Sikorski was appointed as Commander-in-Chief and Prime Minister. A Polish Government in Exile was formed in Paris as the legitimate government of Poland. Its primary objective was the rebuilding of our Polish armed forces in France – the Polskie Sily Zbrojne which fought in the West until 1945.

In fact, Polish troops were already making their way to France. Retreating from Poland across the borders of Hungary, Romania as well as Lithuania and Latvia, we had 84,000 soldiers in France in just a few months. What an organisational and logistical feat this was! 70,000 had been interned in Romania and Hungary. They were evacuated in a series of under-cover operations by rail and also by ship. Many Polish soldiers also made their way to French Syria.

While my duties with the Polish Navy, under British command, kept me in Atlantic – our Polish Armed Forces were being re-organised in France. Our outstanding Polish Airforce numbered 7,000 personnel in France, whilst the soldiers were formed into 4 infantry divisions and 2 brigades.

Having fought valiantly against the German invasion in Poland, in September 1939, 50,000 Polish troops found themselves fighting the Germans again for the defence of France in May 1940. Once again, our armed forces fought with courage and distinction. The allied defence broke in 2 weeks. Consider that Poland fought alone for 6 weeks! But unlike our proud nation the French government capitulated, surrendered to the Germans!

The Polish High Command in Paris made frantic efforts to evacuate our forces rather than surrender them to the Nazis. The Carpathian Rifle Brigade refused to accept the French armistice and crossed from French Syria into Palestine.

The 1st Grenadiers Division sustained bloody losses defending the Maginot Line and were disbanded to reach Britain. The 2nd Rifles Division retreated to Switzerland where they were interned. General Maczek disbanded the 10th Armoured Cavalry Brigade and ordered the troops to reach Britain.

Of the 84,500 Polish troops that had been organised in France at the end of 1939, only 25,000-35,000 were evacuated to Britain after the fall of France in 1940. Our Government had to abandon Paris for London, at the invitation of Churchill. Once again General Sikorski and the High Command had to re-organise the Polish forces. The ground troops were based in Scotland and were formed into the Polish First Corps. 7,000 personnel from the Polish Airforce came under the command of the Royal Air Force.

I now leave my fellow Officers and Sailors of the Polish Navy to join General Sikorski in the high command of the Polish Armed Forces.

For the second time since the invasion of our country by the Germans, we now set about the mighty task of re-building our Polish forces so that we can continue to fight from abroad for the freedom and honour of our motherland. Long live Poland! 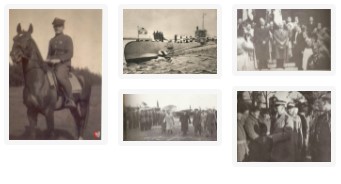