The news that the Germans were coming spread through Choromce like wild fire. During Mass in Wlodzimierzec, the Priest warned us that fighting was approaching and that the Wehrmacht had invaded Kresy. As we were under Soviet occupation, this meant that as of 21st June 1941 Germany was at war with the USSR. It was such a shock but we hoped that the Soviet and the German invaders would loose much blood between themselves and that one day Poland would be free.

As for me, I miss my beloved husband and worry about my sons. The eldest is a Park Ranger and, knowing the forests, is involved with the local partisans who are doing their best to protect us from the increased activity of Ukrainian bandits. The Germans are giving guns to the UPA partisans with little interest for the consequences.

We heard talk of a battle in the county at the end of June around Łuck-Brody-Dubno. We hear it was a major tank battle between the Germans and Soviets and the fighting is getting closer.

Today I received a letter from my friend Krystyna in Lwów with terrible news – the Ukrainians and Germans killed 51 university teachers and 100 students on the 4th July. In Wlodzimierzec there are signs up encouraging the Ukrainians to join the German police and army. The Ukrainians are even wearing German police and SS uniforms. But our Ukrainian neighbours are Polish citizens! Our Government-in-Exile has sent a message that we must not collaborate with the invader.

The whole of the Kresy, stretching into what was Soviet Ukraine, is now a German administrative district called “Reichskommissariat Ukraine”. The capital is in Rowne and there is a German garrison based here in Wlodzimierzec. Like the “Germanization” of Western Poland, we Poles are to be brutally “pacified” and exploited for the benefit of German people. They want our beautiful lands as “living space”.

The Germans have given all the administrative jobs in the region to the Ukrainians. They collaborate because the Germans pretend to support the Ukrainian demand for a Ukrainian national state. It is so worrying.

The Germans have shut our local schools and in secret, at great risk, the underground are teaching our children. We Poles are not to be educated but are only good enough to labour like slaves for our German occupiers.

Now the Germans are bringing in food rationing, and we live in an area that is the breadbasket of Europe! Thankfully I have a small farm and can subsist on my own produce. To make things worse the Germans have closed the flour and oil pressing mills and made it illegal to mill our own. Wladyslaw and Stefan have used their grandfather’s wood working tools and made milling equipment from logs Wladyslaw brought back out of the forest. It is a terrible risk – but winter is approaching and we must eat.

The Jewish community is in turmoil. Many are forced to live in ghettos. Those who collaborated with the Soviets are being rounded up. But now, the Germans and Ukrainians have set the Jews to work digging graves. These are in a disused shooting range beside an access road about halfway between Wlodzimierzec and our home in Poroda. All the Jews in the area were herded to Wlodzimierzec and penned up in corrals closed in with barbed wire under the open sky. Yesterday, on the 28th August, the Jews were marched by Ukrainian and German guards to the graves where they were all shot. As it is only about 2 kilometres from our home we could hear the gun shots – about 3,500 Jews were slaughtered in these ditches. What terror! A Polish neighbour is hiding two Jewish children in her home – if the Germans find them she, and her whole family, will be killed. For Polish people to hide Jews carries the death sentence – what desperate choices we must make.

I am scared every time I go out these days to Choromce, to market or to mass in Wlodzimierzec. Young people are being snatched off the streets and fields by the Germans. The parish priest tells us via his contacts that they are being taken to Germany to be used as slave labour. Even little Polish children who look “Aryan” are being abducted to be adopted by German families. We live in fear of being arrested, interrogated and shot. But still, I feed the few Polish partisans at night. It is a huge risk but I am prepared to die doing my little bit to help free Poland. 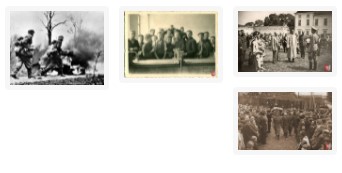