Continued Exile in the USSR

We have pushed the Germans back through Poland, but now we have been ordered to halt by Stalin as the Warsaw Uprising rages across the Vistula River. I feel despair for my Polish compatriots who fight the Nazis alone.

But a letter from my sister, Danusia, who languishes in exile in Siberia has distracted me. My thoughts turn to my family, who are facing their 4th winter in the USSR and surely cannot survive another. Like over 250,000 deported Poles that are stuck there, they did not manage to escape with Anders Army to Persia in 1942.

Many could not cross the vast expanses of Russia to reach the Polish Army before the evacuation; many, like me, had been in labour camps and had not been informed by the NKVD of the amnesty or heard about it too late. Thousands were stopped by the Soviets on their way south, forced to work on kolkhozes. Some did not have the resources, or the strength, or had relatives who were too ill, to travel.

Danusia, in the northern Russian territory of Krasnoyarsk Kraj, could not risk the uncertain journey alone with her young baby. At least she had a roof over her head, sharing one room with a poor but kind Russian family. My younger brother Leopold was not so lucky. Last year, on the 5th September 1943, he was sentenced to the 7th Lagier prison camp for distributing oil to prisoners who had worked hard. We have never heard from him again.

Following the Amnesty in 1941 there was a Polish Delegatura in the region so some welfare and supplies reached my family in Siberia. But as 1942 progressed, and following the evacuation of Anders Army, we all noticed that the attitudes of the authorities began to harden. Polish nurseries and orphanages were closed down, with Polish children being forced against their will into Soviet institutions.

The local Delegatura office in Krasnoyarsk Kraj was effectively closed and the diplomat arrested. This was happening to Polish officials and welfare representatives all over the Soviet Union. Food-aid and clothing ground to a halt. Danusia despaired to me “who will look after us now, we are the mercy again of the Soviets”.

The severest blow came in January 1943. The Soviet authorities took over all the Polish welfare institutions, keeping all the warehouses full of food and clothing aid. Worse still, Stalin announced that all Polish deportees in the Soviet Union were now Soviet citizens. Even though we were ethnic Poles, because we were from the Eastern Borderlands we were forced to become Soviet citizens. We despaired of ever escaping the Soviet hell. Tens of thousands of Poles who refused to hand over their Polish passports and documents were imprisoned or sentenced to the gulgas. One wrote:

“We were placed in cells, one Pole in each. Into those cells, almost at once, five or six Soviet prisoners of the criminal class were also introduced. These criminals not only stole our food but also beat us and persecuted us day and night. The NKVD chief or other officials would summon me several times a day and ask me whether I would now accept a Soviet passport”.

It was hard to believe that events could take another turn for the worse. But in April 1943, following the Katyn crisis, the Soviet Union severed all diplomatic relations with our Polish Government in London. At the same time, the Union of Polish Patriots, or ZPP, a Polish pro-Soviet “puppet” government was created in Moscow. The majority of the Polish exiles in the USSR regarded the ZPP with suspicion and as communist collaborators. But still, the ZPP took over the welfare duties of the former Delegatura. My own fortunes turned around with the creation of a Polish Army under Soviet command. It was a ticket out of the camp and a chance to fight for Poland.

But I could not take my sister Danusia, and her young baby, with me. Her husband had been taken as a POW in September 1939. Luckily she was fluent in Russian, both being able to read and write it, and was able to supplement her subsistence living by helping the local Russians, many of whom were illiterate. But, now, in 1944 the ZPP welfare aid has run out. She writes to me:

“We are facing our 4th winter on Soviet soil. The end of the year looms and we hear nothing of being free. Autumn has come and with it mud, cold and snow. People are logging in the forest barefoot and in rags. We are perpetually hungry. People fall ill and there are no medicines. It has been a year since Leopold was sentenced to a hard labour camp and we have heard nothing from him despite our efforts. We feel hopeless”. 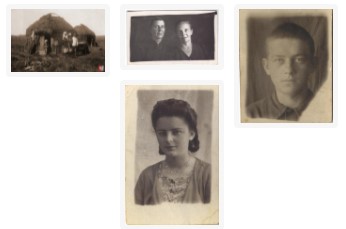 In 1942 approximately 116,000 Poles were evacuated from the USSR with Anders Army to Persia – but hundreds of thousands remained in the USSR

Conditions deteriorated in 1942 for Poles in the USSR: orphanages closed; Polish Delegatura were arrested; welfare stopped

In February 1943 the Union of Polish Patriots, ZPP, was created in Moscow