Listen to his narrative (Polish)

So many years have passed since World War 2. Yet we can’t forget those who suffered, fought and died. We do not want to. Poles are one of the largest Diasporas. Many of us didn’t return after the war to communist Poland. But we have kept our identity, cherished our language, traditions and memories.
Shortly after the war, we took care of the graves of our comrades fallen in Italy, Holland and Belgium. The first monuments were erected, like the one for the 3rd Carpathian Division, or the 3rd Armored Regiment of the 2nd Corps, near Monte Cassino.

Former soldiers of the 1st and 2nd Polish Corps, well known for their heroic battles on the Western Front, integrated well into their new communities after the war. Their new countries (Great Britain, USA, Canada, Australia, Argentina and others) benefitted from their hard work, education, strong families and passion.

We have cultivated connections formed in our pre-war communities and the friendships born during our wartime wanderings. Our commanders, especially General Władysław Anders, inspired us to actively consolidate our expatriate Polish community. We can see the value of it after all those years. Two things mattered for our Commander – the soldier’s honor and his preparation for the civil life of service for the Homeland. His initiative led to the formation of the two most important Polish institutions in Great Britain: the Polish Combatant Organization – a worldwide organization joining all Polish veterans, cultivating memories, and providing social support for its members; and the Polish Educational Society – responsible for the formation of Polish schools, which educated generations of Poles in their language, history and traditions.

Many smaller combatant associations were also formed based on their units, corps, or Siberian exile. Throughout the world, countless monuments, memorial plaques, films, publications and events commemorated the tragic fate of the Polish nation and the heroism of Polish soldiers during WWII.

Despite the unfavorable political climate, the first memorials of the Katyn Massacre were erected. Articles in Western press openly discussed the Stalinist and Nazi crimes, Wolyn massacres, and the fate of the Polish Government in Exile.

Such actions were impossible in communist Poland, and even less so in the former Borderlands which became a part of the USSR. The Soviet terror was remembered only through family lore, and any public discussion of this could land you in prison, expelled from your university or your job. Until the 1970s, no contact with the West was allowed, so many families separated during the war could not communicate with each other. The communist media distorted the history of WWII, negating the existence of Katyn, Siberian deportation, or the role of the Polish Armed Forces in the West. Despite the Stalinist terror, arrests, and secret police, people were searching for the truth – listening to the Radio Free Europe, creating and reading underground press. In the 1970s, the first official mentions of Monte Cassino and

After the fall of communism in 1989 multiple new initiatives to commemorate the fate of Polish citizens during WWII were started in Poland.

Restoring ties between Poland and its emigrant communities, clearing historical lies, and commemorating the history through monuments, films and publications, all were realized in many public and government initiatives. The fall of the USSR further enabled research, travel and establishing contacts with Poles living in the East.

In 1992 the truth about the Katyn massacres was finally, partially, revealed. In 2000 the victims were commemorated by the creation of Polish War Cemeteries in Katyn, Kharkov and Miednoje. In 2012 a Polish War Cemetery was opened in Bykownia on the outskirts of Kiev. Multiple cemeteries were formed in the former USSR and in the Middle East, to commemorate Poles who died from hunger and disease before the evacuation of the Anders Army from the USSR. The heroism of the Polish Soldier is honored by the cemeteries in Tobruk, Monte Cassino, Bologna, Lenino and Breda. There are also memorials to Polish Airmen, Sailors, soldiers of Berling’s Army fighting in the East, and to the Polish 1st and 2nd Corps, fighting in the West.

There is still much to be done – the largest tasks are the unmarked graves of tens of thousands of Siberian deportees, the genocide victims from Wolyn and Galicia, and the victims of the so-called Belorussian Katyn list.

We must remember all those people, to record their memories and to pass this part of Polish history onto the next generations and to educate people of all nationalities. Old veterans, like me, are so happy that the new generations of Poles are joining these efforts. 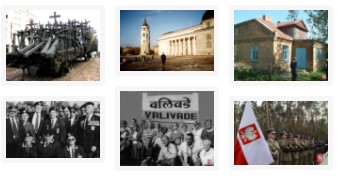 18.07.1945 – Commemoration of the monument of the 3rd Carpathian Rifle Division on the 593 Hill of Monte Casino. The monument is dedicated to the Polish soldiers who fought there during the battle of Monte Casino from 12 till 18 of May 1944…

18.07.1945 – Commemoration of the monument of the 3rd Carpathian Rifle Division on the 593 Hill of Monte Casino. The monument is dedicated to the Polish soldiers who fought there during the battle of Monte Casino from 12 till 18 of May 1944.

1946 – Polish Combatants Association, embracing ex- soldiers of the Polish Armed Forces in the West, was formed in London. In the following years many branches were created in various parts of the world.

12.10.1946 – Consecration of the Polish war cemetery in Bologna, the biggest Polish necropolis in Italy.

14.05.1953 – The Polish Educational Society in Great Britain formed from the initiative of General Władysław Sikorski.

18.09.1976 – Commemoration of the Katyn Memorial in London, the very first in Western Europe, dedicated to the victims of the Katyn massacre.

1988 – The Association of Sybiraks reactivated in Warsaw.

06-09.2000 – Ceremonial openings of Polish cemeteries in Katyn, Kharkiv and Mednoye.

09.2012 – Opening ceremony for the Katyn cemetery in Byknowia, near Kiev.