Polish Forces in the West

As I sit here in the Headquarters of General Maczek we have just received a message from the garrison of Wilhelmshaven that they will surrender to us tomorrow. You can imagine the joy this has brought us. We have come a long way. The Germans used to call us “General Sikorski’s tourists”. Most of us have had epic journeys to get here; and we Poles have fought on every front. My own journey began at the end of August in 1939. I was a junior officer in the navy then. We were ordered to leave our Port to escape the invasion that was coming. At that time our navy was small, but the British have lent us some ships and our sailors have served well. Our ships have been on convoy escort to America, in the Mediterranean and in the Arctic. We lost the Dragon during the Normandy
landings and the Piorun was involved in attacking the Bismarck. It’s great that the Piorun’s captain, Commander Pławski, sent a message: “I am a Pole” to the Bismarck before opening fire.

Our Airforce has been busy too. It now has 18 squadrons; both fighter and bomber, but it too started small. After defending Poland in 1939 many of our pilots managed to escape and get to France and reform, but after the Germans invaded they had to move again this time to England – just in time for the Battle of Britain. I don’t think the British really trusted our fliers so our experienced pilots had to sit on the sidelines while British losses mounted. Anyway, when they did let us have a go, our lads showed them what Polish pilots can do when given good machines. 303 Squadron joined the battle two months late and still shot down more Germans than anyone else. Our flyboys are very popular in England and their efforts in 1940 have brought Poland great pride.

My own journey went a different way. In 1940 I was appointed adjutant to the late General Sikorski, our commander in chief, as we set about building up our Army. Like our pilots, there were many soldiers in France who needed to be evacuated. Under French command our men fought in the disastrous Narvik campaign in Norway, and also to defend France in 1940. Many were evacuated to England, some ended up in French Syria under General Kopanski. After the French collapse they crossed into British Palestine and as the 3rd Carpathian Infantry Brigade they took part in the siege of Tobruk in 1941. They are now in Italy serving under General Anders.

The Poles in England started operations by guarding the coast, manning anti-aircraft artillery and operating armoured trains, but we soon set about forming an armoured division and a parachute brigade. In 1943 we were hit by tragedy when General Sikorski’s plane crashed in Gibraltar. His death hit us hard, and I was very lucky not to have been with him at the time. I was assigned to our Intelligence Bureau – the Dwójka as we call it, and sent to work with General Maczek, commander of the 1st Polish Armoured Divison. We landed in Normandy in August of 1944 and were assigned to the 1st Canadian Army. We got bombed twice by our own side which was [pause to look for appropriate word] UNFORTUNATE! But we still managed to smash the Germans when we met them at Falaise
and Chambois. The operation was a huge pincer movement. The British Canadians were coming from the north and the Americans from the south. This created a huge pocket encircling the German 7th Army. Someone had to stop the Germans from retreating east and it was our division that was sent into close this pocket at Falaise. The fighting was desperate and bloody. The Germans were determined to escape, and we were even more determined to stop them. There were a lot of old scores that had to be settled. The worst fighting was on Hill 262, or Mont Ormel as the French call it, where the 1st Armoured Regiment were cut-off and running out of ammunition. I have the report of Colonel Stefanowicz as he addressed his men before what he believed would be the end:

“Gentlemen. Everything is lost. I do not believe the Canadians will manage to help us. We have only 110 men left, with 50 rounds per gun and 5 rounds per tank… Fight to the end! To surrender to the SS is senseless, you know it well. Gentlemen! Good luck – tonight, we will die for Poland and civilization. We will fight to the last platoon, to the last tank, then to the last man.”

That’s the kind of men the Germans were up against. Anyway, it turned out well. The two flanks linked up. We lost nearly 20% of our combat strength, but we held our position. In honour of our effort some Canadian sappers put up a sign which reads: A Polish battlefield.

All of this was going on while we were getting news from Poland about the rising in Warsaw. Our parachute brigade was desperate to go to help but it was not to be. Field-Marshal Montgomery managed to convince the Americans about his plan to capture the bridge over the Rhein at Arnhem by air, and an armoured thrust up a narrow road through Holland. How did anyone think that Operation Market Garden would work? Our brigade was sent into help the British Airborne Division that was holding the Arnhem road bridge but due to bad weather we dropped two days late, and most of our men landed on the wrong side of the river. General Sosabowski, the brigade’s commander, and also the biggest critic of the plan, tried desperately to get his men across the river
but the casualties were horrific. The brigade lost 25% of its strength with very little to show for it. A huge waste of good brave men. And General Soasabowski? The commander of the 1st Airborne Corps relieved him of his command. It seems General Browning found a scapegoat for Montgomery’s failure.

As for us, we pushed north through France and the low Countries. We liberated St Omer, Ypres, and the city of Breda. We spent the winter on the south bank of the Rhine before entering Germany last month. And so here we are. Wilhelmshaven, the home of the German Navy. Back at the sea where my journey began. The Germans once laughed at Sikorski’s tourists… I don’t think they will be laughing tomorrow 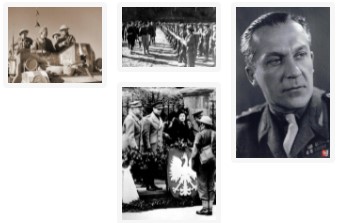 The Polish Armed Forces in the West were subordinated to the Polish Government in exile. They were formed largely from…