Father woke me early on 1st September as he had been told to report to his regiment – the Germans were attacking along the border. He said I needed to be strong for mother as she will be worried about Ludwik. It was possible that his division, the Korpus Ochrony Pogranicza, would be moved towards the front lines.

The situation was chaotic. Poland mobilised 39 infantry divisions, 3 mountain brigades, 2 motorised brigades, 10 cavalry brigades…. but the Germans attacked us on 3 fronts with powerful panzer formations and the Luftwaffe bombed civilians in towns and cities deep behind our defence lines.

Despite alliances with Britain and France who finally declared war on Germany on the 4th September – they did not mobilise on our Western Front. Poland was fighting on her own. Our airforce, though heavily outnumbered, fought brilliantly. The Navy had been on a heightened state of alert for months and 3 destroyers left the Baltic for Great Britain just before the German onslaught. Two submarines also escaped although most of the warships were destroyed. Meanwhile
Polish positions on the Baltic put up strong resistance.

Because Father is a General he managed to get word to us. But the news was not good. He said the Polish forces were fighting desperately for our country but that they were falling back on successive lines of defence. Warsaw was under siege. On the 6th September he had reached the Vistula but the Polish Commander-in-Chief Marshal Smigly-Rydz ordered him to withdraw his forces back to the south-east, towards Romania. That was the last we heard from father.

Sunday 17th September is a date that will live in my memory forever. Mother awoke me. I thought I was late for mass but she was screaming and crying, “the Soviets, the Soviets”. The Red Army had invaded Poland from the East in the early hours of the morning. What a shabby Army they were – rifles slung over their shoulders with string, skinny horses without proper bridles or saddles.

It was not until years later that we learnt about the secret protocol of the Nazi-Soviet Non-Aggression Pact which agreed to divide Poland between them. All of the territory invaded by the Red Army, the “Kresy” or “Eastern Borderlands”, was later annexed to the Soviet Union after a rigged election. Little did we know that they had already agreed a trade treaty and that the Russians were supplying fuel and other equipment to help Germany in their war effort. Father always said that the difference between the Germans and the Russians was this: The Germans would tell you what they would do to you, and then do it. Where-as the Russians would tell you one thing and then stab you in the back when you were not looking. How dare the Soviets cross the Zbrucz River!

But still waiting for the allied offensive and desperately fighting the Germans, we were doomed. Our Polish Army was retreating eastward and not yet re-grouped when faced with this invasion from the Soviets. The situation was chaotic. Communications and transport lines were down and there was mass confusion.

In those first few days after the Red Army entered the Eastern Borderlands we were full of tears and worries – what would this mean for father, Ludwik and Uncle Paweł on the front line? Rumours of mass arrests by the NKVD, the Soviet secret police, abounded. Warsaw held out under siege from the Germans until 27th September. Sporadic fighting went on until the 5th October. Poland had fought alone for 6 weeks but our defence had collapsed. 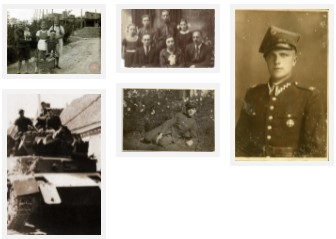